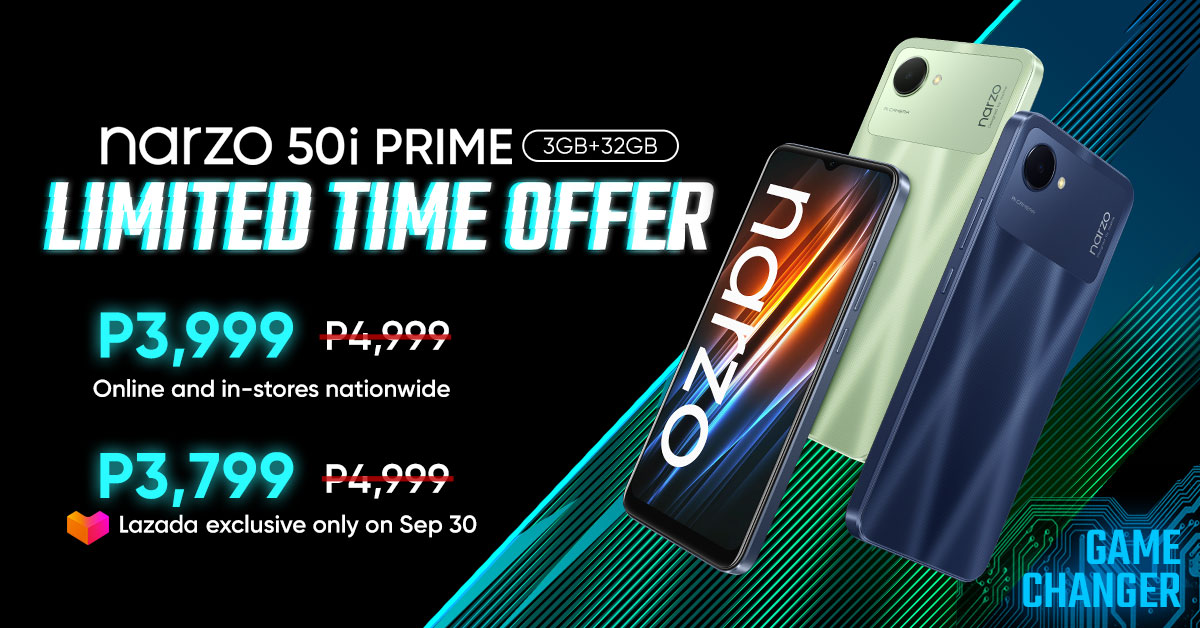 narzo ends September with a mindblowing reveal for the narzo 50i Prime. The fastest moving performer of the narzo 50 Series will be on a limited time offer of only PHP 3,999 across online and offline platforms nationwide, starting September 30.

What’s even better is that customers who will purchase through Lazada can enjoy the payday exclusive offer at only PHP 3,799, valid only this September 30, starting 12MN.

“We want the narzo 50i Prime to be the Filipino’s gateway model into discovering the game changing features of narzo,” says Elaine Dela Cruz, the new Marketing Representative of narzo Philippines.

“Through this limited time offer, we want to encourage more and more Pinoys to try the narzo brand for themselves and find out why it’s been hailed as quality sulit. We are confident that long-time narzo fans and even newcomers alike will enjoy this reliable, all-rounder smartphone for years to come.”

Just last August, even at its original Suggested Retail Price of PHP 4,999, the narzo 50i Prime has already broken several records. The model holds a back-to-back sold-out milestone on Lazada and Shopee during its initial release, as well as being the bestseller on TikTok and at physical narzo kiosks.

As a new brand that listens to its local customer base, narzo Philippines aims to democratize technology by making it more affordable and more accessible to all walks of life.

Game Changer made even better

The narzo 50i Prime (3GB+32GB) is now more affordable than ever while still maintaining a great price-to-specs balance for its segment. It is powered by a Unisoc T612 Processor on a 12nm Octa-core node with two Cortex-A75 and six Cortex-A55 cores, which allows for a smooth operating experience. This also translates to good visuals with the help of its 6.5-inch HD+ Large Display, perfect for both work and play.

The model also edges out its competitors in the sub-4k price segment by being expandable up to 1TB via MicroSD card in its Triple Card Slot, which lets users store a lot more, and at the same time use two nano SIM Cards. It also offers one of the cleanest and most intuitive operating systems at its bracket, the realme UI R Edition, which runs on Android 11. It comes in two cool colors with vertical stripe design: Dark Blue and Mint Green.

No compromise on product and services

narzo’s game changing features do not stop at specs alone: the new brand takes care of its fanbase from purchase down to aftersales through 20 active service centers shared with realme that can cater to repairs and warranty.

As more people join in the fold, they soon find out that narzo smartphone ownership also means having a growing community alongside them. narzo Philippines is in constant engagement with its customer base, often holding activities and promotions that keep the community alive, such as the recently concluded narzo Stream Raids.

narzo’s shared heritage with realme—the number one smartphone brand in the Philippines for six consecutive quarters—ensures the same level of quality and overall user experience that fans can expect, even at a budget-friendly price point.

Aside from Lazada, the narzo 50i Prime and the narzo 50 series are also available on Shopee, TikTok Shop, and all 27 narzo stores and kiosks nationwide.

For more information and latest updates on narzo Philippines, follow the brand’s official Facebook page and tune in to the daily live streams on TikTok. Join the twelve-thousand strong narzo Philippines online community to be a part of the real game changer!